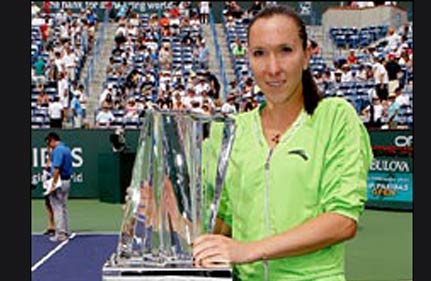 Former world number one Jelena Jankovic jump-started her 2010 season Sunday with a straight-sets victory over Caroline Wozniacki for the Indian Wells WTA title.

Jankovic didn’t put a foot wrong as she downed her Danish opponent 6-2, 6-4 to claim her 12th career title and her first since Cincinnati last August.

“It’s been a great two weeks for me, really amazing,” Jankovic said. “I’m so happy and so thrilled that I was able to win this title.”

The Serbian came into the tournament ranked ninth in the world and seeded sixth, while world number four Wozniacki was seeded second.

But neither woman had made much noise this season, with both failing to reach a quarter-final until this week.

Jankovic had her struggles, eking out a third-round victory over world number 49 Sara Errani before posting solid victories over Shahar Peer and Alisa Kleybanova.

She had Wozniacki on the defensive early, rolling to a 4-0 lead in the first set before the Dane managed to break her to cut the deficit to 4-2.

Jankovic broke back immediately and pocketed the first set on her third set point as Wozniacki fired a forehand long.

She maintained the momentum by breaking Wozniacki in the opening game of the second set, and made the break hold up. She earned a match point with a backhand winner and sealed it when Wozniacki belted a service return long.